There is no shortage of time to think during the long days, nights, weeks and months at sea onboard a freight ship – even in pirate-infested waters.

And when Steve Regis found himself scouring the horizon for attackers in the Indian Ocean, instead of succumbing to boredom he put the time to good use.

The former Royal Marine couldn’t understand why most commercial ships defended themselves only with flimsy coils of rusty barbed wire, which failed to deter all but the least motivated marauders. They would simply plonk their ladders against the hull, or throw grappling hooks, before scrambling over the top.

Regis said: “I was there as a guy with a gun to do what was necessary to keep the vessel and crew safe. But as well as that physical presence, we were there to help train the crew on the best way to react in a worst-case scenario and to advise on the best way to harden a vessel, how to make it as difficult as possible for someone to board a ship.

“Nine times out of 10, that involved using coils of concertina razor wire, and from my experience in the Marines and five years at sea, I started seeing this was a very ineffective and inefficient way of trying to protect a ship.”

Regis came up with a solution which looks remarkably similar – plastic hook-like devices which are mounted along the edge of a ship and are almost impossible to snag with grappling hooks or ladders.

After bidding farewell to the perilous seas for the last time he set about making his vision a reality by teaming up with an Edinburgh product design company and experts in maritime engineering.

Five years later, his ABaC (anti-boarding and climbing) device adorns the sides of more than 350 ships, £9 billion of assets, around the globe.

He said: “Even if it’s brand new razor wire, it’s pretty easy to get over the top of. It’s a delaying tactic that delays people by seconds, but also it washes away, rusts and corrodes.

“It got me thinking – is there a better way we can do this? So I did some sketches and concepts, and validated it with the crews and the captains I was sailing with.”

Regis, originally from south Wales, joined the Royal Marines straight from school and served as a corporal in theatres of war in Afghanistan and Iraq. Like many with his experience and expertise, after leaving the armed forces he worked as a security architect in the City of London.

A spike in pirate attacks off Somalia and Yemen between 2007 and 2009 caused panic in commercial shipping circles and Regis seized the opportunity to serve as an onboard guard on freight ships and oil tankers.

There were a few close shaves.

Regis said: “There was an immense amount of fear and trepidation for crew members. There was a couple of incidents I was involved in where we had approaches or attacks, that we fended off.

“We did have some crews where senior officers were blasé when we were doing briefings or security training. But the moment when there was a real live threat situation, they would panic and it required composure, the cool heads of the security team to say, this is what we need to do, follow the training.”

The experience was the twist of fate that would lead to his eureka moment and the formation of ARX Maritime on his return in 2014 to Edinburgh, where he had settled with his now-former wife.

He now runs the company as a chief operations officer with chief executive Josh Hutchinson, also a former Royal Marine.

It is one thing to fend off Somalian pirates, another to defend yourself against the ruthless Iranian Revolutionary Guards. The recent seizing of two UK-owned oil tankers in the Strait of Hormuz has raised anxiety among most companies which channel billions of pounds worth of business through the narrow strip of water.

Regis admits that there is little a company can do to prevent the heavily armed Iranians dropping from a helicopter on to the deck of a ship – but ARX has been busy issuing dossiers to clients on how to mitigate the risk and how to deal with a crisis situation should it arise.

“Can you stop special forces fast-roping onto the deck?” he said. “The answer is no, but there is a process you can go through if it’s about delaying them, stopping them getting control of the bridge and getting access to the crew.

“You can use a methodology which is based around layers. Our primary layer is what’s around the perimeter and that’s our anti-piracy barriers. If they’ve fast-roped from a helicopter, they’ve breached that first layer of security, but then you have layers that involve simple things like bars on the windows and internal locks on the doors.

ABaC is only part of the business. ARX also supplies tracking devices, emergency signal transmitters and ‘man overboard’ distress beacons but its day to day service involves providing risk assessment dossiers to companies of all sizes, including major energy companies. A team provides reports tailored to each company and ship’s needs, including information on dangers in the areas they travel in but also the changing political situations there.

Regis said: “We’ve put out one recently which is a detailed report on the risk and different things you can expect in the Straits of Hormuz, the tactics that might be deployed by the Iranian Revolutionary Guard, the capabilities of their weapons systems, their fast attack boats, mini submersibles and helicopters. We look at some of the different scenarios if certain types of equipment or tactics were deployed, what the response of a UK warship might be and what it could lead to.

“We also look at the bigger picture, understanding that the Strait of Hormuz is a critical waterway for transporting hydrocarbons and if for whatever reason the passage should become restricted or even locked, what is the initial impact to shipping, but then what is the impact to the local and the global economy in terms of oil prices going up and how that can affect markets.”

As for the Persian Gulf, Regis knows navies such as Britain’s can only protect so many ships, and only for so much of the time. Oil and shipping companies are acutely aware that the next crisis is only a Donald Trump tweet away.

Regis said: “It’s a very dynamic situation. The first port of call for the majors is the coalition navies in the area because they’re the ones that can offer the immediate emergency response, but that’s very much dealing with it in a short term way. 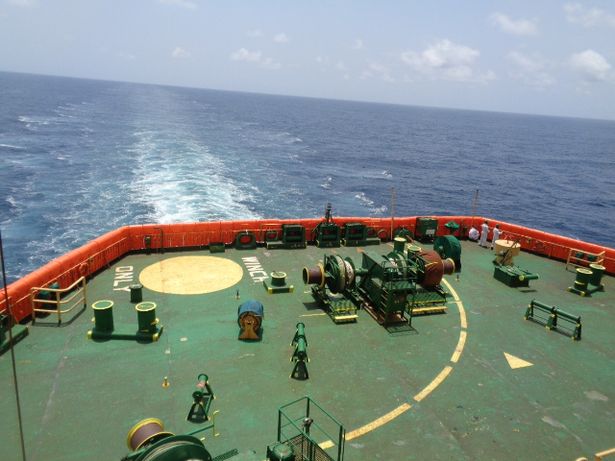 “What we’re looking at is how can we can, understanding that there’s a listed resource in the area in terms of navy ships, and it’s not necessarily going to be there indefinitely, use our consultancy approach as well as the products we’ve got, to be able to offer a long-term solution.”

It may have been a twist of fate that led Regis to settle in Edinburgh 12 years ago but he is glad things turned out as they did. ARX Maritime, now part of the newly formed Castellum Group was recently named as one of top three businesses to watch in the RBS Accelerator scheme for start-ups and scale-ups. Regis and Hutchinson have formed a new sister company, Smart Shipping, which is developing new technology.

Regis said: “In hindsight, I’ve been very lucky. Scotland is a fantastic place to start a business in terms of the support you can get from the local government, through Scottish Enterprise and Business Gateway, as well as the entrepreneurial ecosystem.”