Instead of building a 100-kilowatt weapon, the Army now plans to leap straight to 250 or even 300 kW — which could shoot down much tougher targets.

WASHINGTON: Less than three months after awarding a $130 million contract to build a 100-kilowatt laser, the Army has decided to skip the 100 kW weapon and go straight for a much more powerful one in the 250-300 kW range. Unlike the original design, the higher power level could potentially shoot down incoming cruise missiles — plugging a glaring gap in US defences against a Russia, China or Iran.

The US has invested massively for decades in defences against rocket-boosted ballistic missiles such as Scuds and ICBMs. But meanwhile jet-powered cruise missiles — which fly lower, slower, and more manoeuvrability — have proliferated around the world, even to high-end irregular forces like Iran-backed Hezbollah.

“It’s a tremendous piece that we have neglected and only over the past couple of years have begun to reckon with,” said Tom Karako, director of missile defence studies at the think tank CSIS. “This sort of thing sounds like exactly what we should be doing.”

The news was buried in an Army announcement Friday that Northrop Grumman and Raytheon would build competing prototypes for a 50-kW laser mounted on an 8×8 Stryker armoured vehicle. As the service has said for some time, the first platoon of four laser-armed vehicles would enter service in fiscal 2022, complementing a model armed with conventional anti-aircraft guns and missiles.

Both Stryker variants are part of the Maneuver Short-Range Air Defense (MSHORAD) program, an urgent effort to protect frontline combat units against drones, artillery rockets, helicopters and attack jets. You’d need a relatively expensive missile to shoot down the tougher and higher-flying targets, but 50 kW lasers powered by the Strykers’ engines would provide cheap and virtually limitless kills against low-flying drones, like those used by everyone from the Islamic State to Russian artillery spotters.

But the Army is also building a larger, more powerful, but less mobile truck-mounted laser to defend static sites like command posts, supply depots, and airfields. This weapon would be part of the Indirect Fire Protection Capability. Originally focused on insurgent rockets, artillery, and mortars, the IFPC program has been overhauled to focus on cruise missile threats as the Army reorients from Afghanistan and Iraq to Russia and China.

The next step was going to be a 100-kW weapon called the High Energy Laser Tactical Vehicle Demonstrator (HEL-TVD), built by Dynetics and Lockheed Martin, with demonstration shots in 2022. But on Friday the Army said it would be “adapting” this effort into a 250-300 kW weapon called HEL-IFPC, with the first platoon of four prototypes — not demonstrators, but operational weapons — to enter service in 2024.

When I inquired what exactly “adapting” meant, the Army clarified they are no longer going to build the 100-kW HEL-TVD. Instead, senior scientist Craig Robbin explained through a spokesperson, “the Army will take the HEL-TVD through a Critical Design Review, leverage that works and applies the outcomes to the 250-plus kW effort.”

It’s not yet clear what will happen to the $130 million contracts awarded in May to Dynetics and Lockheed. The Army could either modify it to have the same contractors build the more powerful weapon — presumably for more money — or end the current contract and hold a new competition.

Whatever the contract mechanism, why does the Army now believe it can get a weapon up to three times as powerful in just two additional years? Part of the answer is an increased sense of urgency and tolerance for risk across the Army. The service has slashed almost 200 lesser programs to fund faster fielding of its Big Six priorities for a major war, which range from 1,000-mile missiles to robotic tanks to VR training. No. 4 of the Big Six has improved air and missile defences, without which the rest of the force would be fatally vulnerable to Russian or Chinese precision-guided weapons.

Last December, the Army combined its most technologically challenging efforts — hypersonic missiles and laser weapons — under a new Rapid Capabilities & Crucial Technologies Office, led by Lt. Gen. Neil Thurgood, the service’s highest-ranking acquisitions Program Executive Officer. Army leaders have made clear their goal is not only to field weapons faster but to stop wasting time and money reinventing the wheel. Initiatives that duplicate work already underway elsewhere in the Army or in its sister services will be cut.

And there is a lot of work underway across the Defense Department on lasers (as well as hypersonic). In May, the Air Force shot down several anti-aircraft missiles with a ground-based laser, a forerunner of a self-defence pod called SHIELD meant to go on US planes; it’s also developing a ground-attack laser for the AC-130 gunship. Meanwhile, the Navy, having already fielded a 30-kW laser in the Persian Gulf, is now developing a 60-150 kW weapon, HELIOS, for its new Arleigh Burke destroyers. And Thomas Karr, a physicist who works for Pentagon R&D chief Mike Griffin as assistant director for directed energy, is running a project with all three services on scaling up high-energy lasers to higher power levels. The Army is “leveraging” Karr’s work and “coordinating” with the Air Force and Navy, a service spokesperson said.

Each of the services has different challenges, said CSBA expert Bryan Clark. Lasers on aircraft have tight constraints on size and weight, but the rush of air provides free cooling. Lasers on ships have much more room, but they need dedicated coolant systems to keep from overheating. Army lasers on trucks “kind of get the worst of both worlds,” he said — limited room and no easy way to dump the heat.

So the supporting systems for the laser — power generation and storage, cooling, vibration control, compensation for atmospheric moisture and dust — will need to be tailored to the environment. But, Clark said, the core technology still has so much in common there’s no point in reinventing it.

As the Army announcement put it, “This partnership will allow the services” — note, not just the Army — “to achieve a higher power system, of approximately 250-300 kW-class, that can protect sites from RAM [Rockets, Artillery, & Mortars] and UAS as well as more stressing threats.”

The Army declined to clarify what those “more stressing threats” might be. But experts at the independent Center for Strategic & Budgetary Assessments told us that 300 kW was the crucial threshold for a laser that could shoot down cruise missiles. CSBA was one of the first think tanks both to sound the alarm about the proliferation of precision-guided missiles, once an American monopoly, and to call for increased research into lasers to counter them. 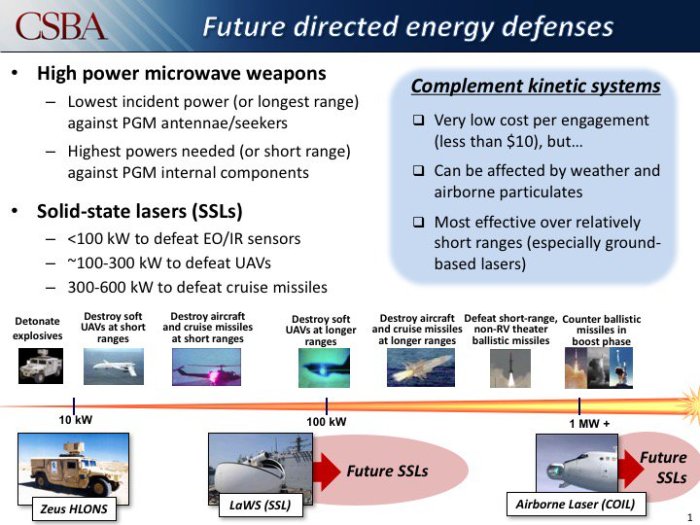 “We saw that 300 kilowatts as the absolute minimum cut off to be able to have a viable counter-cruise missile capability on a laser,” said CSBA’s Clark.

Not all lasers are created equal, nor are all cruise missiles. Even on a particular missile, the nose is not only a smaller target than the sides, but it’s also often made of tougher material — especially on the fastest missiles, which have to harden their nose cone against heating from air friction. So at 300 kW, Gunzinger and Clark said, you really don’t want to be shooting down a cruise missile coming straight at you, you’d much rather get a side shot.

That requires careful planning of where you put your defensive lasers, rather than just plunking them next to whatever you’re trying to defend. Even if you do get an ideal firing angle, the faster the missile moves, and the more unpredictably it manoeuvres, the harder it is to hold the laser on the exact same spot long enough to burn through. (Real-life lasers are a lot less Star Wars­­-style explosions and more like holding a magnifying glass over a scurrying ant).

So a 300-kW laser may not be much of a barrier to the latest, fastest, most agile — and most expensive — cruise missiles being fielded by Russia or China. But it could do a lot against the slower, cheaper cruise missiles that still make up most of our adversaries’ arsenals. Right now, our only defence is a small number of exquisitely expensive Patriot, THAAD, and Navy Standard Missile interceptors, which amassed salvo of cheap cruise missiles could simply overwhelm.

Given the threat, CSBA argues, it’s better to field imperfect defences ASAP and then upgrade them over time, instead of waiting to develop the ideal weapon in the lab.

“It is great to see the Army pushing hard to field prototype directed energy systems, Gunzinger told me. “Getting lower-power DE capabilities into the hands of operators — so they can experiment with them, explore new concepts for their use, etc., then transition to higher power capabilities as they mature — is a far better approach than waiting for the perfect solution before kicking off an acquisition program.”